A devout person of sound mind and curiosity would be very well enamored to go hunting and pecking as to the unconstitutional J6 Committee going after the likes of Peter Navarro and Steve Bannon of all people, without thinking that Mike Pence knows much about this as well as does his RINO chief of staff, Marc Short. That person of sound mind and curiosity happens to be the aforementioned Pence, who indeed does have a lot of explaining to do.

Remember if you will the Red Flags that were raised about Pence very early on when he threw General Michael Flynn under the bus by siding with Sally Yates and Obama, of all people, in which Biden efforts to take out Flynn WITHOUT verifying the content of Flynn’s return phone call to the Russian Ambassador was procedural-legitimate as the incoming National Security Director.

So Pence was pot planting all along. A pence for the earworm Spy Pence … Turncoat shows true colors as the enemy within…

Additionally, the specious Pence was also deceptive about his lack of truthful communication to President Trump PRIOR to Pence’s decision-al actions for January 6. All of which is documented in Peter Navarro’s excellent book: In Trump Time.

Pence has many lingering areas within which he should be made to come to full account for. Not only did Dr. Scott Atlas verify in his book (A Plague Upon Our House), but Pence green-lighted the Birx and Fauci damaging lockdown messaging, while ignoring Dr. Atlas’s statistical input which was also President Trump’s – ie Open up our nation’s workforce and schools with ONLY targeted lockdowns for the elderly and compromised immune population.

So Pence was pot planting all along! The logic goes that most traitors are cowards at heart, but how exactly does one find the justification to trust a sanctimonious, phony poseur like Pence? Additionally he has a bit of GWB in him, just wants to be loved by everyone. Which always doesn’t work. No matter how much you give to demoMarxocrat Leftists they will eventually stab you in the back. Guaranteed!

Pence is simply pusillanimous, nothing more, nothing less. Yet still another narcissist to boot who LOOKS too old even if he isn’t, still harboring aspirations of a White House run, for goodness’ sake. We’ve had enough of too many old-looking white men. They’re a big part of the Republican past. Time for Pence to retire. Most wouldn’t give “tupPENCE” for his chances. So Pence was pot planting all along.

Thomas Lifson, American Thinker: Mike Pence has got some ‘splainin’ to do’ …

Jeffrey A. Tucker spotted some interesting writing from Dr. Deborah Birx, presumably from her recently published book Silent Invasion, that admits she sabotaged the COVID policies of President Donald Trump.

But even worse, she claims she did so with the tacit approval of then-V.P. Mike Pence, who was appointed as the point man for the federal government’s COVID efforts.

And here is D Birx openly admitting that she subverted and undermined the White House policy priorities, and did so with the tacit approval of VP Pence. 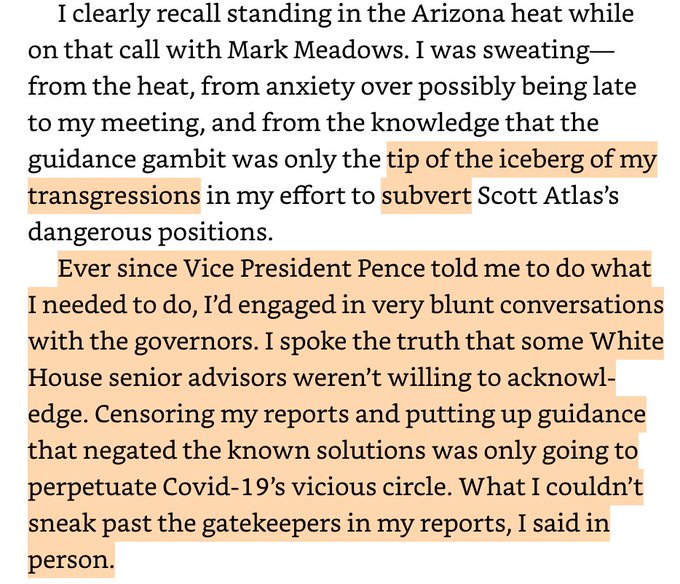 So Pence was pot planting all along. Fauci, Birx and Pence…

Pence certainly showed his true colors early on, as others noted. While he claims he’s very loyal to “his side” and very religious, he has a propensity to sell his soul to whoever he thinks will get him the best coverage and best future in power. Many dropped Heritage membership when they hired him, being the grifter that he is, following whoever is best for him. He turned on Trump purely because he thought the press was better on the other side. Some loyalty!!

Hoosier politicians who move up the political ladder still manage to muck up that next step. Look at Mitch Daniels, who was the United States OMB Director at one time (ie United States Office of Management and Budget) After OMB, Daniels took on the job of president of a once-great Indiana university, Purdue, and Purdue is now as woke as any community college in the US.

The “MIT of the Midwest” is not anywhere near that now. Purdue’s graduating engineers may still make better engineers than most of their graduating brethren from other colleges, but Purdue is capable of so much more. It remains stuck in the political muck that is today’s “higher education”.