En Garde in the bunker…

Masks, muzzles, mayhem and farce … In case you missed it all somewhere along the way on the yellow brick road, “Science” left the building when doctors and nurses agreed to go along to get along when politicians said life doesn’t begin until birth; when scientists decided to take the money and didn’t fight back against the transgender hoax; when they fallaciously didn’t respond against the ‘climate change’ hoax, and so on and so forth, etc., etc.

The voices of professionals bereft of speaking up against the lies, lies, and fairy tales are legion. Yes, they are being silenced but, surely, there are numerous examples of outlets where they could take the time to speak up; were they of a mind to so, of course. But it seems they’re afraid of the Greta Thunderclouds of global warming hysteria. They’re awed by the Stephen Hawkings’ of the world who openly profess, for instance, that there is no God. What’s the bet that Hawking definitely knows now.

The truth will surely set you free, if you will only acknowledge Truth. 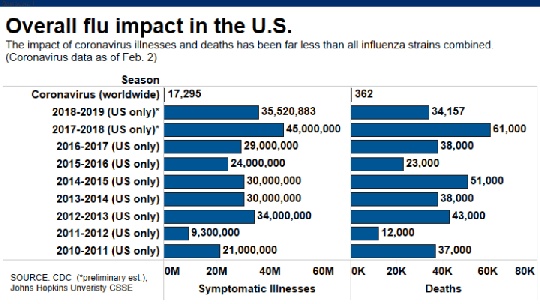 Every single flu season, there are between 20-million and 60-million infections in the US alone. I believe this may be how we reach herd immunity (it doesn’t require 60% of the population, as some have said, because we’ve never before reached that level). We’re currently at 2.5 million or so. The flu is going to spread, like it always does. Yes, we should definitely protect the at-risk populations, and let the rest of us get on with our lives.

People die – as long as yours truly has been on the planet, I’ve noticed they always do. We can’t just continue to shut down our economy. There could be more than unforeseen complications to our food supply for one thing. Whatever happened to “flattening the curve”?

Jack Hellner, American Thinker: ‘No Scientific Data that Masks save lives, so why vote for Biden who says wear ’em?’ …

If Joe Biden is elected, the wearing of a mask in public will [become] mandatory, nationwide.

“The one thing we do know is these masks make a gigantic difference. I would insist that everybody out in public be wearing that mask. Anyone to reopen would have to make sure that they walked into a business that had masks,” Biden told CNN’s affiliate in Pittsburgh, KDKA, while wearing a black mask.

Pressed if he’d use federal power to mandate wearing a mask in public, Biden responded, “Yes, I would. From an executive standpoint, yes I would.”

Asked again if that meant he would “in effect” mandate mask wearing, Biden said, “I would do everything possible to make it required that people had to wear masks in public.”

In Illinois, our governor and his health experts say continuously that they base all their dictatorial edicts that have destroyed our economy on science and data. They chastise other states for reopening too soon and having less strict standards. We are lectured that our health will be jeopardized if we travel into surrounding states with less strict standards, including not requiring face masks. What we don’t see are data from other states to support those statements. Supposed journalists never challenge the statements by doing research and reporting data so I will do it for them.

Here is data through June 28th, almost four months into the serious effects of the virus and almost two months after some states started substantial reopening.

The eleven worst states, along with DC that had the most deaths per 100,000 people were mostly the most restrictive.

Almost all the states with the worst death results had very strict dictatorial edicts. Meanwhile some of the states that were much less restrictive and have been reopened for up to two months have much better results including:

Link to completion down below…

In Texas for instance, we now have a ‘pause’ before opening up the state. Out of almost 30 million citizens we have about 3,000 in hospitals around the state – that’s .01% of our population. Even the counties within which Dallas, Austin, San Antonio, and Houston have had a ‘surge’ of cases, still have an abundance of beds and ICU beds in their hospitals.

If local hospitals are any guide, they’re seemingly devoid of patients, to be honest. Anyone going in for patient visits has a challenge to find occupants.

Additionally there are counties that have had no cases and dozens with less than 10. Why the whole state needs to be on the same ‘pause’ and not allowed to open based on local circumstances, is a conundrum.

We humanoids are geared to look each other in the face to get a “tell” from that person; friend or foe? With masks, we become shadows in the street, not real people. Even a baby stares at its mothers face and memorizes that face; a face with safety, warmth and food that it cannot associate with a mask.

The old saying: “a faceless mob” is now true of our entire society. And once the government gets an idea in its head, it can’t let it go. God forbid that people be required to wear masks for a generation. “Who’s your best friend, little Billy?” “I don’t know what he looks like but he wears a black mask.”

Jack Hellner, American Thinker: No Scientific Data that Masks save lives, why vote for Biden who says wear ’em?