Go ahead, make my…

Sundance upends Chuck Grassley … Now here’s one for the books that could reverberate with some considerable thunder within the halls of government itself. Obviously never one to be a shrinking violet, Sundance and Conservative Treehouse have taken to calling out Chuck Grassley of all people on the hardline topic of forever playing games with calling out traitors to the Constitution with nary a wisp of intention to carry anything out to full conclusion.

If I’m not mistaken yours truly and scores of others have about had it up to here with the likes of the Trey Gowdy’s and Paul Ryan’s and Lindsey Graham’s and Burrs, Cornyns, Lees etal and literally scores of others and their forever “we’re gonna get to the bottom of this” and never, ever, do.

U.S. Senator Chuck Grassley implied this morning that USAO John Durham may not provide evidence of the already well-documented effort to remove President Trump from office until after the November election:

“I have a general idea of how Mr. Durham’s investigation is going. … There’s a difference between an abuse of power and a federal crime. Not every abuse of power, no matter how outrageous, is necessarily a federal crime,” Barr said during a press conference. “Now, as to President Obama and Vice President Biden, whatever their level of involvement, based on the information I have today, I don’t expect Mr. Durham’s work will lead to a criminal investigation of either man. Our concern over potential criminality is focused on others.”

Barr told Fox News in June that he expects there to be “developments” in Durham’s investigation into the Russia investigation this summer even as he hinted that it would continue through the November election. (more)

To which the fearless Sundance responded:
@TheLastRefuge2 .@ChuckGrassley Allow me to assist. You name the date and time, and I’ll meet you in your office (or anywhere) with all the verified documents you need to review evidence of a purposeful, willful and direct DOJ-FBI and USAO (DC) conspiracy to cover-up SSCI corruption. Your move. 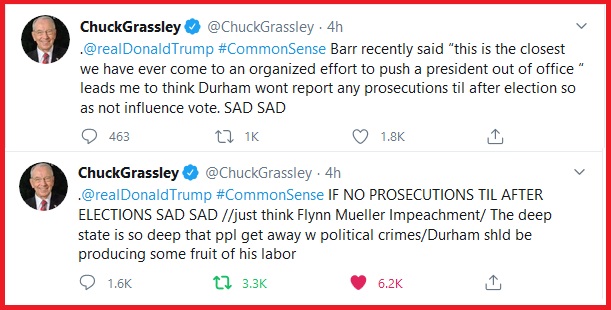 Long time CTH reader here. I called Sen Grassley’s office and actually spoke with someone. Told him to take up the offer and that it’s time to sh*t or get off the pot. I’ve got your back Sundance.

One could very well presume that the Gates of Hell are prevailing, but I’m one of many here who believe there is a bigger plan afoot, and that Barr will do the right thing. The PA Governor Wolf wrist-slap was a gut punch, and notice that we are dealing with a metastatic cancer that refuses to heal like a nasty infection.

Inherent flaw alert – exempting self when writing rules! Our founders worried about the law being abused by a king-like ruler to control Congress, so they added extra protections. But they didn’t conceive of a permanent Congress of octogenarians exempting self. In the minds of the founders, Congress simply recessed and went home and lived under the rules.

But lately the attacks on our way of life has almost become too much. Time to be about it, not talk about it or read about it anymore. At this point speaking out at every opportunity to let it be known this leftist BS is not welcome here in the constitutional republic. Its go, go Sundance time!

“Justice will not be served until those who are unaffected are as outraged as those who are.” ~ Benjamin Franklin

And on that note, time for today’s MAGA Pill – President Donald J. Trump and Sundance at his side – MAGA! KAG!

See also, Conservative Treehouse: Do You Really Want the Book? Begin With the End in Mind

And, Conservative Treehouse: Act or Be Acted Upon